I first visited America about ten years ago and totally fell in love with the place, especially the east and west coasts. There’s just something about the friendly service in shops and the relaxed attitude in diners that makes eating out a joy and that’s pretty much the way we planned our days, around a series of eating experiences! 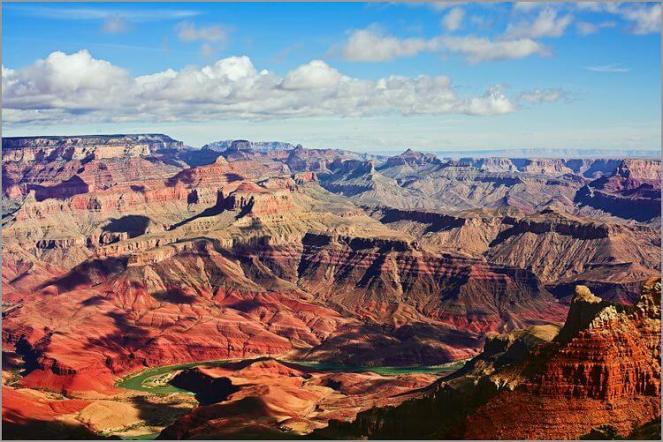 Of course, there were plenty of other things to do in between snack spots and from natural beauty, such as the mountains and forests of Virginia, to sprawling cityscapes, like Vegas and LA, there really is no end of things to see when you’re travelling through.

Below are just a few of my own personal highlights and as I was lucky enough to travel overland, from the east coast to the west, I was able to get a real sense of contrast from one state to the next. If I had to pick a favourite city I’d have to say Washington DC and this seems as good a place to start as any on my top five things to see in the USA.

Standing proudly in the National Mall of Washington DC, the Lincoln Memorial is a splendid example of Greek architecture right in the centre of America’s capital city. Built to honour, none else than, Abraham Lincoln, this imposing structure has since been made equally well-known by Martin Luther King who gave his ‘I have a dream’ speech during a jobs and freedom rally back in 1963.

With the vast reflection pool in front and the WWII Memorial beyond, the Lincoln Memorial is indeed one of the unforgettable highlights of any trip to Washington DC.

In stark contrast to the manmade structures of Washington, the Grand Canyon, in Arizona, is one of the finest examples of stunning rock formations known to man and well worth a visit if you’re heading out west. As it’s almost 300 miles long and just less than 20 miles across, it’s no surprise that this incredible geological feature has been attracting visitors for thousands of years, starting with the Native Americans.

Still to this day the land is considered as a holy site to the Pueblo people and as such is viewed with the utmost respect no matter where you come from.

The Statue of Liberty

Back on the east coast is one of the world’s most iconic landmarks, the Statue of Liberty, and if you’re in New York City then it would be rude not to pay your respects to the first lady of America. Designed by French architect, Frederic Bartholdi, and presented as a gift to the USA from the people of France in 1886 to commemorate American independence, this is probably the most recognisable statue on the planet. Take the ferry to Liberty Island if you want to get up close up and personal or, alternatively, take the round trip to Ellis Island and you can see the statue as you sail past.

San Francisco is an absolute ‘must visit’ for your USA holidays on the west coast and as soon as you see those gigantic red painted arches looming through the mist then you’ll know that you’re in the presence of greatness. This massive suspension bridge forms the welcoming divide between the Pacific and the San Francisco Bay and you can drive, walk and cycle over it to get a unique perspective of the city beyond.

At over a mile in length and well over 500 feet above the water, this is one of the world’s most glorious structures and the views as you drive into the city are simply breath taking.

At the tip of the Florida Peninsula you’ll find a tropical oasis that’s as glamorousas it’s naturally beautiful and if you’re looking for a little bit of sunshine then this is the place to be. This is simply paradise for wildlife lovers and from the Everglades to the Coral Reef State Park; you’ll discover a whole host of fascinating creatures that call southern Florida their home. Islands, such as: Key Largo and Key West, are famous the world over and present a blend of cultural and natural attractions that were once the stamping ground of literary greats, such as: Hemingway and Williams.

A blog post by Tommy Shaw a photographer and an avid travel blogger. There are so many places to discover, enjoy and experience all around the world. Join me as I travel and discover new places one at a time, one day at a time.